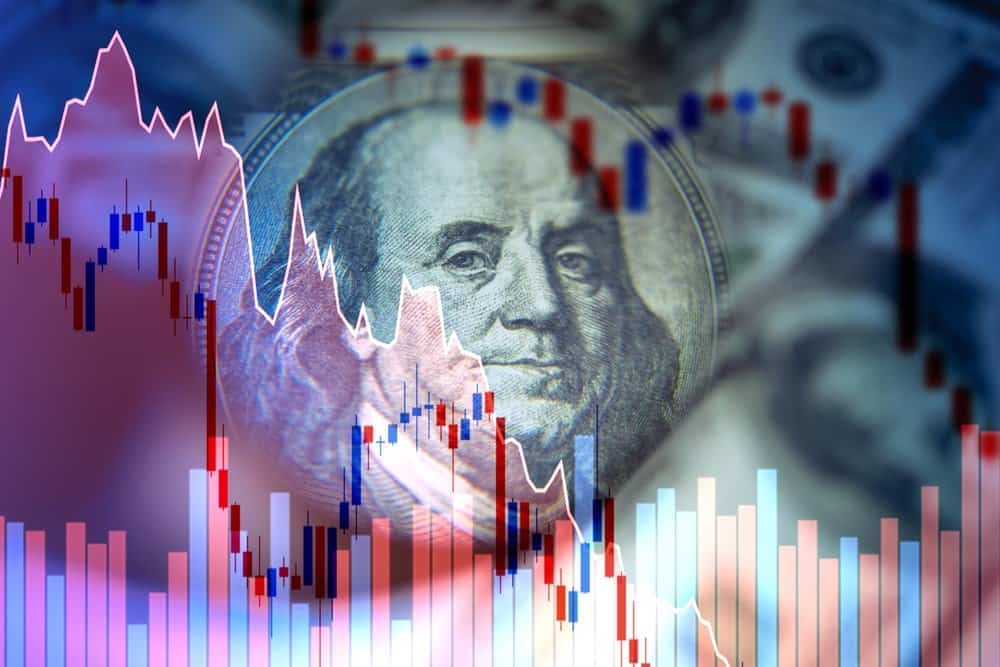 Dollar Slips while Everybody Talks Vax

Dollar Slips while Everybody Talks Vax

To me the buck [-0.80%] had the most interesting move this week – it fell four days out of five, printing a weekly swing high/strong bearish reversal (70%).  Money flowed into bonds [-7 bp to 1.27%], and is starting to move out of equities – at least a little bit [-0.37%].  SPX sector map was bearish.  Perhaps that mild decline in equities is hinting at the foreclosure moratorium ending?  If the dollar decline continues, it should be good for PM. 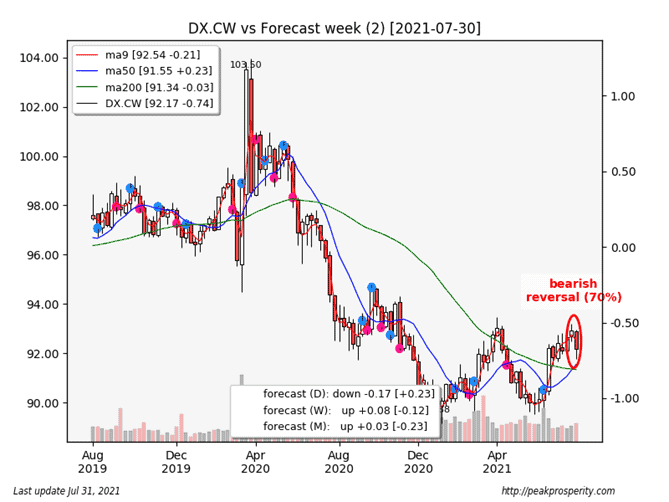 Related: gold, silver and the miners all moved higher, with the miners looking strongest [+5.99%].  XAU printed a strong bullish reversal (68%) and it has resumed its uptrend.  Gold and silver have yet to do so. 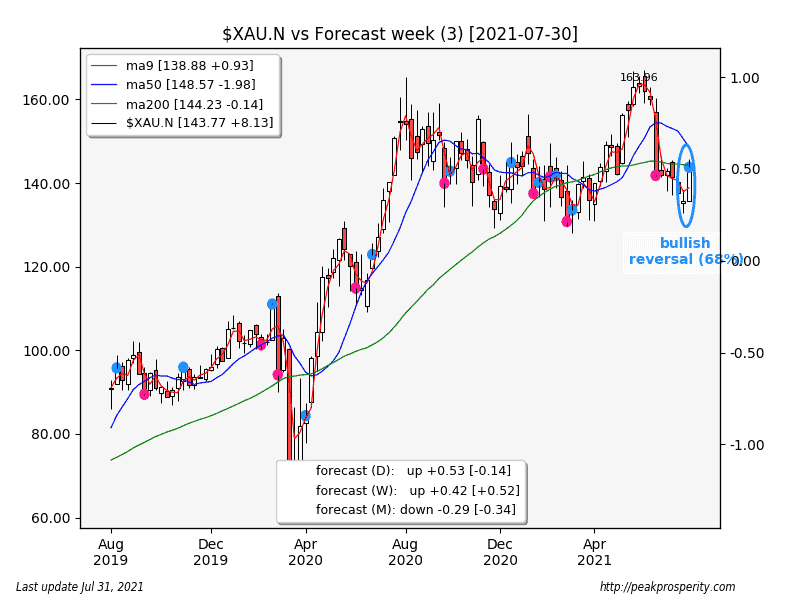 In silver, open interest remains at year-low levels.  Silver moved up for much of the week, but all the OI did was drop.  To me, that’s unusual – and bullish; normally the banksters go short as price rises.  This week’s odd behavior – which has been going on for a while now – suggests that the banksters do not want to be short silver, and they’re using every opportunity to bail out of their short positions.  The COT report confirms this – commercial shorts are even lower than open interest; they are at a two year low.  Gold OI looks similar, although it is not quite as bullish as silver. 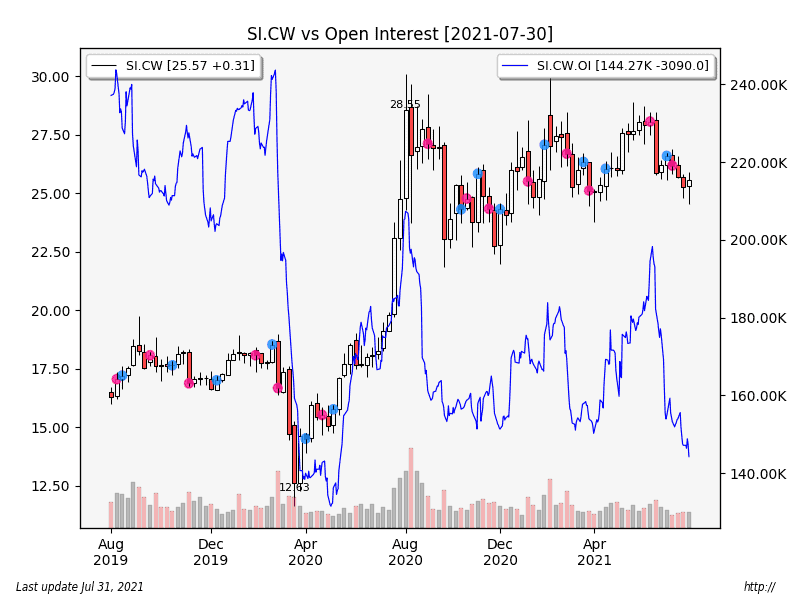 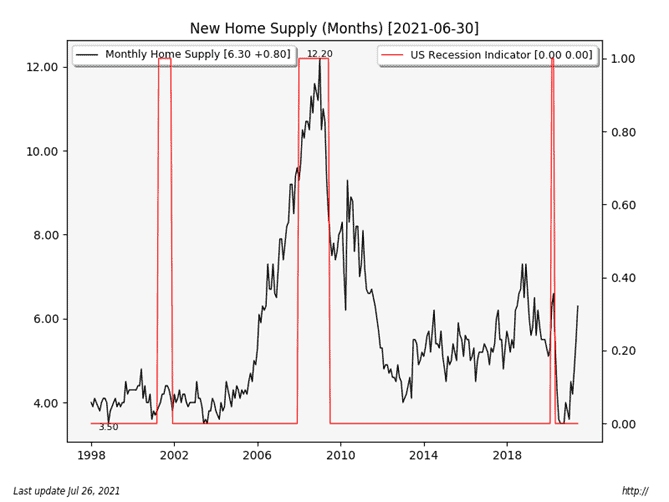 Practically nothing was sold in the under $200,000 price category. The under $300,000 price category accounted for only 28% of total new house sales, down from 39% in June last year. That’s where the volume used to be, but people willing and able to buy a new house under $300,000 are out of luck – prices have moved away from them. And facing those higher house prices, and already struggling with soaring prices in the goods and services they need on a daily basis, they went on buyers’ strike.

A similar drop was seen in the auto sector; auto/light truck sales fell -1.6m (-10.6%).  This is generally a recessionary indicator.

Chris talked about food prices, so I went and dug up some old charts I had constructed on food back during the “food riots” of the 2012 timeframe: 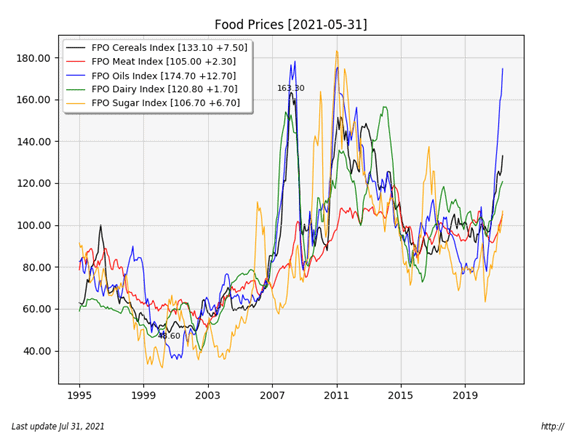 The “oils” component of food tends to be the most volatile, and it has shot up to levels last seen in 2010.  Cereals have not moved nearly as dramatically, but overall food prices are nearing their 2010 peaks too.  This is a monstrously big deal, especially for nations where people spend most of their salary on food.  Mostly not the West: the US population spends 7% of income on food (9% for the UK, 14% for France), while in Egypt this number is 41%.

So Jerome Powell’s “transitory” inflation: prices “transit” higher, and then – best case – prices stay there.  Worst case: they keep on rising.  And what’s annoying to us, is life-changing in the third world.

While the standard definition of inflation is – “a monetary phenomenon”, Armstrong has a definition that I have found that is more predictive over time: namely, inflation is driven by shortages, and confidence.  Example: right now, there’s a shortage of homes in “desirable areas” (e.g. outside cities), as well as shortages in other things too.  Likewise, there is a “confidence” issue regarding the behavior of government (“WTF – more lockdowns??!”) in certain cities (looking at you, NYC), and uncertainty about what the future might hold overall.

How do you think all the inexplicably stupid actions of most of the governments in the West will impact confidence going forward? According to Armstrong’s hypothesis: the steady collapse in confidence is incredibly inflationary.  As shortages develop in “mitigation items”, confidence in government drops, and prices leap higher.

Based on this “confidence” model of prices – the Great Reset, etc – inflation (measured by price increases & shortages) will almost certainly get worse.  As time goes on, confidence in government will continue to plunge.

News Items That Caught My Eye This Week

While the economic news was about inflation, most of the rest of the news items were around vaccination.

Biden to federal workers: Get vaccinated or face restrictions

It turns out, labor doesn’t like mandatory vaccinations.  Not postal workers, and not teacher’s unions.

Maintaining the health and safety of our members is of paramount importance. While the APWU leadership continues to encourage postal workers to voluntarily get vaccinated, it is not the role of the federal government to mandate vaccinations for the employees we represent.

Meanwhile, CDC had some secret slides that “someone” released to WAPO.  In Israel, VE (vaccine efficacy) has plunged with Delta: infection (VE was 95%, now 64%), symptomatic disease (VE was 96%, now 64%), but hospitalization & death are mostly unchanged (VE is roughly 95%).  What was an infection-reducing shot is now definitely not-a-sterilizing-shot at all. 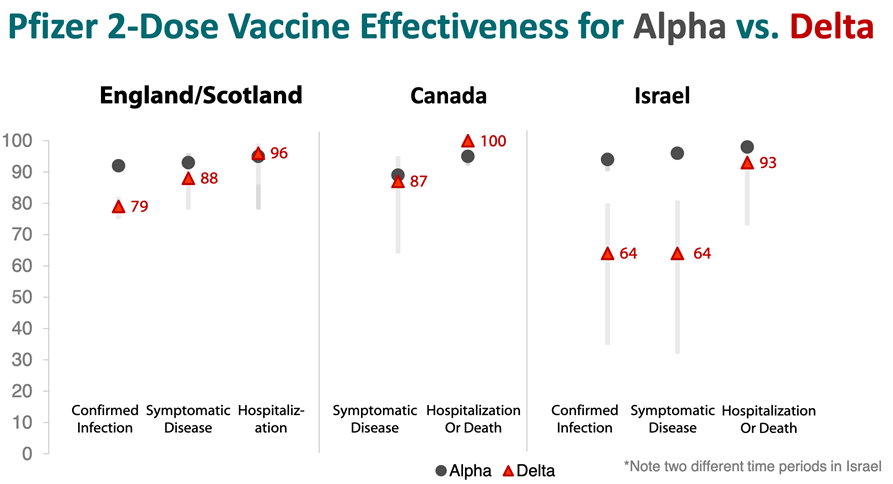 Note: this is the primary US-based Vaccine Marketing Organization cataloging all this – behind closed doors. In public, though: “Its a pandemic of the unvaccinated!!”  I suspect that one lasts at most for another week.

WAPO had some non-Industry people review the secret CDC slides. I just about fell out of my chair when I read this. h/t Alex Berenson – who was subsequently blocked by @jack – for a full week! – for the crime of posting actual Pfizer trial data.  “PFE doesn’t like us to post dis information!”

“I think the central issue is that vaccinated people are probably involved to a substantial extent in the transmission of delta,” Jeffrey Shaman, a Columbia University epidemiologist, wrote in an email after reviewing the CDC slides. “In some sense, vaccination is now about personal protection — protecting oneself against severe disease. Herd immunity is not relevant as we are seeing plenty of evidence of repeat and breakthrough infections.”

“We really need to shift toward a goal of preventing serious disease and disability and medical consequences, and not worry about every virus detected in somebody’s nose,” Neuzil said.

Of course this is a reasonable interpretation of the data, but the fact that WAPO would actually publish such an interpretation is the game-changer. It says: “The Stakeholders are in the process of losing WAPO.”

“The danger of this “immune escape,” said Bossche, is heightened enormously by lockdowns, which prevent the body’s innate immune system from being adequately challenged by random pathogens and other environmental agents to keep it trained and fit.”

Even CNN noticed the evolving reality of “immune escape”.  Of course they went on to draw the usual conclusion:

(CNN) Vaccination alone won’t stop the rise of new variants and in fact could push the evolution of strains that evade their protection, researchers warned Friday.  They said people need to wear masks and take other steps to prevent spread until almost everyone in a population has been vaccinated.

Well of course.  Whatever the question is, the answer is always the same: Lockdown!  And double-mask!  And vaccinate everyone with a non-sterilizing vaccine!  Because, common sense!  That’s the sure-fire way to fix immune escape – Harsher Lockdowns plus Mass Vaccination!  [Please ignore what VDB said above about lockdowns weakening immune systems.]  But at least CNN noticed the bit about immune escape.  So there’s that.

In Israel, the long-awaited boosters have arrived, six months after Israel’s vax-everyone campaign that was supposed to bring about WHO-defined new-herd-immunity, and protect everyone forever from the dreaded plague.  They’re starting in with the boosters for folks over 60, who got the shot more than 5 months ago.

…Those over 60 who were vaccinated over five months ago will be eligible. Bennett said that all the seniors who already had two doses of the Pfizer vaccine should “go get the supplementary one” and that he will be calling his own mother to tell her about the new jab.

I’m guessing a “Jewish Mother” joke would be inappropriate here.

Pfizer just got religion on “antiviral treatments.”  Why might that be?

Alongside vaccines, success against COVID19 will likely require antiviral treatments for those who contract the virus.

Only eight months after Dr Kory’s Senate testimony, the WSJ has finally decided to publish a positive-sounding Op-Ed that says Ivermectin is a “promising Covid treatment.”  There was none of the usual talk of “head lice”, or “horse medicine”, etc.

Why Is the FDA Attacking a Safe, Effective Drug?

About that eviction ban – will it be extended?  The Supremes [5:4 ruling] said that CDC couldn’t do it – now Old Corrupt Joe is asking Congress to do it with 2 days left on the clock.

My guess is “no”.  Just like the $15 minimum wage didn’t quite make it through the Senate.  Bad Joe Mansion!

And the best news of the week: we have victory!  After 20 years, and $2 trillion dollars, America is finally declaring victory in Afghanistan, and coming home – as we did in Vietnam in 1975, as the Soviets did in Afghanistan in 1988, and the British before them (in 1842, 1879, and 1919).  While it may not be a classical “military” victory, the departure from Afghanistan is definitely a victory for troops and citizens alike.  Less so for the Generals at the Pentagon – but you can’t please everyone.

Airlift begins for Afghans who worked for U.S. during its longest war

First – I notice that many of the subjects that we’ve been talking about for months is now hitting the mainstream.

The current fly in the ointment: vax mandates.  What are all these “mandates” about?  Tripling-down on mandates when the vax is showing distinct signs of publicly acknowledged failure makes no sense.  What could they be thinking?

Here’s my guess: this is an attempt to execute a political purge of the various government organizations of people who are not “Science Followers” – i.e. the last remaining moderates, and/or supporters of the Bad Orange Man.  Oligarchy wants to cement control over the Federal bureaucracy at the lower-to-mid levels, and a “vax mandate” is the lever they are using to do it.  Maybe the CDC has a bunch of secret insurrectionists?

I’m guessing “they” ran the numbers: who got the shot, and who didn’t, and realized that if they mandated it, they might be able to “push out” a useful percentage of the remaining holdouts.

It’s worth a try, right?

My framing for this whole Pandemic Great Reset/US version: “Vietnam 2.0”.  Back in the 60s, there was support for the war for quite a while. Oligarchy could do whatever it wanted.  But as the truth came out, support progressively fell apart.  By the end, anyone who had supported the war was just utterly discredited. In retrospect, progress was marked by waypoints: 1) doubt: the Tet Offensive & “losing Walter Cronkite”, 2) disclosure: the Pentagon Papers, and 3) consequences: the Nixon Impeachment, and the Church Committee.

Where are we now? Maybe: in the middle of “the TET Offensive” (vax failure) and “just starting to lose Walter Cronkite” (WAPO).