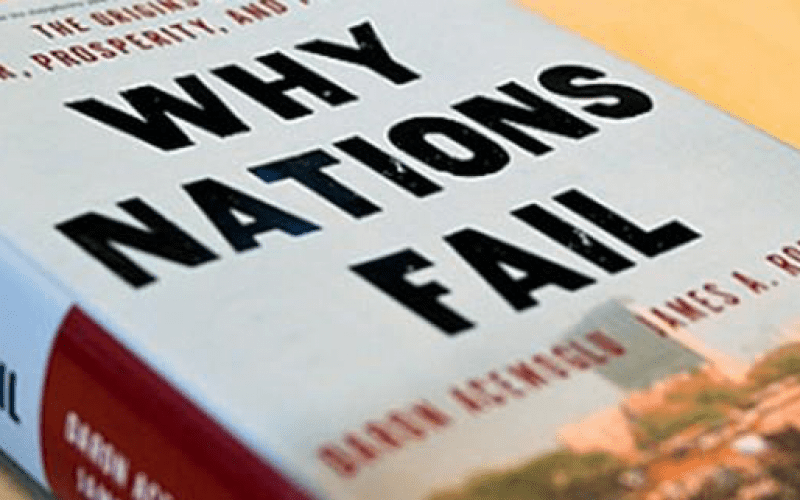 Why do some nations rise while others wither? Why have some of the world's largest empires eventually crumbled? What are the 'best practices' that a modern nation should follow if it desires sustainable prosperity for its citizenry?

To answer these questions, we welcome MIT professor Doran Acemoglu and co-author of the book Why Nations Fail. His observations? Yes, national prosperity has some correlation to the resources available to the State, but importantly, it's determined by how those resources are put to productive — and fair — use:

It all depends on incentives and opportunities. If people have opportunities to become rich, to open businesses, be innovative, do things that are going to further their interests and at the same time the nation’s GDP (Gross Domestic Product) and they have incentives to do so, that’s going to lay the foundations of economic prosperity. It sounds extremely simple but the thing is that most nations don’t provide those sorts of opportunities and incentives to their citizens and therein lies sort of the big divide. How do we summarize those opportunities and incentives? It's the institutions, the rules, formal and informal regulations, and organization of society that determines what sort of opportunities are available to different people, to people from different walks of life, and what sorts of incentives they function under.

If you want to summarize what we say about the United States in the book, a fair summary would be US is an example of inclusive economic and political institutions but it’s always had its own challenges starting with slavery, then building up to great inequality both economic and political during the gilded age which saw robber barons and huge monopolization of American business, then segregation and now a remaining sidelining of a significant fraction of US population in terms of economic opportunities.

One area that I would highlight is that the entire world, but also the United States in particular, is in the midst of another economic revolution. New technologies and globalization providing huge opportunities for increasing our productivity, increasing our ability to produce goods economically and increase the variety of goods that we produce for our consumers but these opportunities are also creating very unequal gains. Globalization for example, or trade with less developed economies such as China are reducing labor costs, but in the process are destroying a lot of jobs and these gains that accrue to companies or some subset of consumers are not necessarily automatically spreading to the rest of society.

The problem is even more dire when you come to new technology such as artificial intelligence, robots, which are coming online right now but over the last 25 years we have a broader process of automation going on which took a lot of jobs and made them more efficient but in the process created both unemployment and downward pressure on the wages of a significant fraction of Americans. All of these are creating challenges about how do we take the gains that are being created by this amazing globalization and technological changes and make sure that the rising tide lifts both…both in terms of gains so that we don’t create huge inequalities and therefore huge discontent within society and also importantly, in terms of opportunities so that we don’t destroy the relatively level playing field that the United States has compared to other countries, so that’s the first challenge.

The second challenge, perhaps not unrelated, is that every society continuously struggles with limiting political inequality. Politically inclusive institutions which I mentioned earlier on…they rest on the premise that no single individual or no group of individuals is going to become so powerful as to dictate the political choices of society. One-person one vote, one-person one voice. Of course, it’s not going to be perfect but broad distribution of political power. Well, that’s never true in any society but it also becomes harder and harder sometimes as certain groups, certain individuals, start accumulating more political power. I mentioned Venice. That’s how the decline of Venice started. Some people said…Okay, we’re going to monopolize the Venetian Parliament. We’re going to not allow other people to come in and become politically powerful actors in the society and then the whole thing unraveled. In the United States, we have the same thing coming from the fact that money matters a lot in politics, a lot of people have become disinterested in politics, a lot of people don’t have their voices heard in politics, and that is translating into huge political inequalities.

Click the play button below to listen to Chris' interview with Daron Acemoglu (43m:52s).