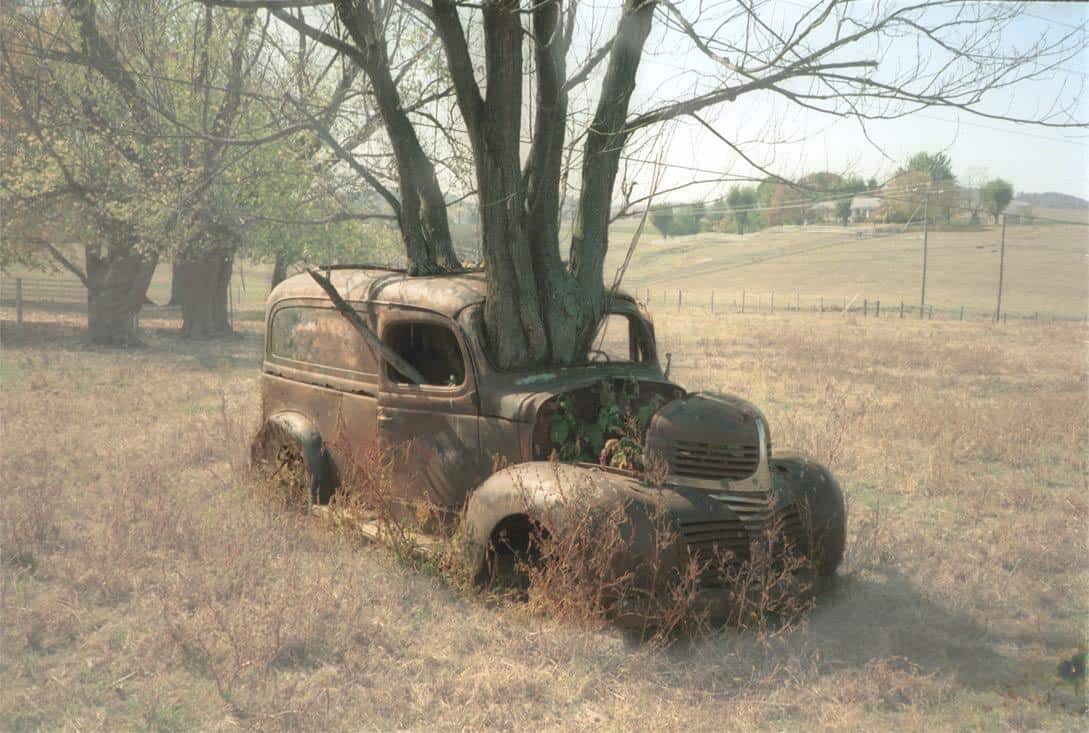 Collapse Is A Process, Not An Event

Collapse Is A Process, Not An Event

Look, I’m a systems guy.  I think in systems terms.  You should as well.

Because we’re entering a period of time when the major systems that have supported humanity are going to fail.

Or, put more accurately: they are already failing.

As just one example, our monetary system delivers outsized gains to the already stupendously-wealthy while piling up massive debts on the backs of we citizens, both born and yet-to-be-born.  The US Federal Reserve is the unelected and unaccountable body that is most responsible for have made America’s billionaires nearly $1 trillion ‘richer’ since the pandemic hit.

These next three Fed-related data points are, in a word, obscene.

The first shows that the US Federal Reserve now “owns” more US federal debt than all foreign central banks. The second shows how billionaires are getting grotesquely wealthier from the Fed’s “rescue'” efforts. And the last shows how the Fed’s record-low interest policy has resulted in an explosion in federal debt: 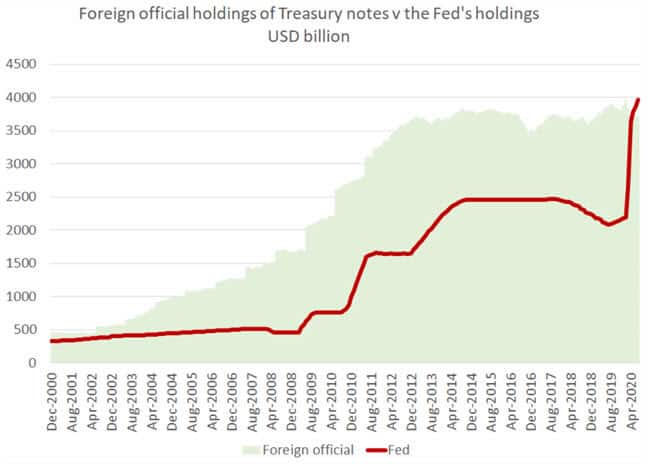 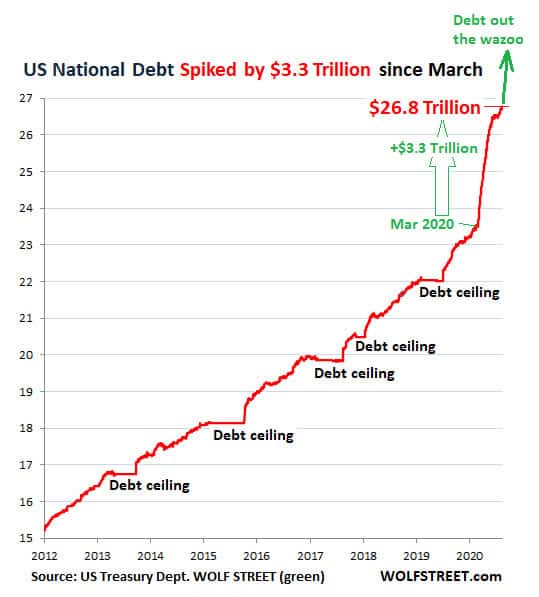 This is obscene (and infuriating!) to anyone who cares about the future.  Leaving aside the morality issues for a moment, we can at least conclude that the behaviors and values on display are thoroughly unsustainable.

Eventually spending more money than you have ends in ruin.

Speaking of spending what you don’t have, a similar story can be told about ecological overshoot and humanity’s extractive practices —  it’s akin to spending both the entirety of the interest income as well as some principal each year from our environmental trust fund.

There aren’t many resources that one can point to which aren’t in some serious form of either concerning decline or depletion, or both.  Already thousands, if not millions, of people in the American West are considering relocating because of the ever-present danger of disruptive if not life-threatening fires:

California, Oregon, and Washington are on fire.

At least 33 people have died in recent days, and more than 5 million acres have been scorched as out-of-control blazes rage across the American West. The 2020 wildfire season in California is already the most destructive in the state’s history — exceeding the record set in 2018, which in turn beat the record set in 2017. Experts agree that rising temperatures from climate change have turned much of the region into dry kindling, ready to spark in an instant.

Disasters like these displace people. Tens of thousands of fire survivors have been forced to flee their homes, and more than 500,000 — half a million — Oregonians have been warned they might soon be ordered to leave. In the meantime, many evacuees are sheltering “in an assortment of RVs, cars, and tents.” Many do not know if their homes will still be standing when they try to return, or where they will go if those houses are indeed destroyed. The fires will eventually end, but for many residents of the region, the disaster is just beginning.

The climate refugee crisis has come to America.

I’m less certain that we can pin these fires entirely on climate change, as poor land use and fire suppression practices factor in prominently. But I’m certain that many of the afflicted people will be convinced that wide-scale annual fires are now a permanent feature of the region, and that will cause many to move to ‘safer’ places.

Once that perception is solidly in place, the masses will relocate.  Similarly, we’ll see people abandon coastal areas which are already losing battles to rising sea levels, and other areas where droughts are getting worse and worse.

However you add up the data points, they coalesce into one theme: massive and disruptive change has arrived.

You can either ignore that reality for a while longer. Or get busy responding.

The hardest part about detecting collapse lies not with the data – that is clear as a bell ringing on a still morning – but with the emotional difficulty of accepting it (and then acting on it).

There’s a lot of science behind how we humans are wired to accept or reject information based on whether it confirms or refutes, respectively, the belief systems we are already holding.

Nobody desires harder times for themselves. Nobody wants to lose financial ground or leave behind a worse world for their children.

But what we want has nothing to do with the reality of the situation.

What we want is usually based on our preexisting belief systems.  If those are out of alignment with the actual reality of the situation, then our best chances for personal success lie with adjusting our beliefs as rapidly as we can.

While our brains can come up with some clever delaying tactics and can-kicking technologies, the reality is that we’re just another organism on a crowded planet, subject to the same rules as every other life form.

When we have ample resources available to us, we’re peaceful, creative creatures.  We do really cool things, like figure out germ theory and make computer chips.

But what happens when resources are tight, or even insufficient to support daily life?

Then humans act badly towards each other and become tribal, but not in a good way.  We squabble and go to war over dwindling resources.  We do this not because it’s a dominant strategy with a proven track record, we do it because of our inability to wisely recognize the resource limitations in advance and cleverly avoid them.

During such times, the elites have a noted tendency to cling ever more tightly to their relative advantage rather than yield any of towards the common good:

“People of privilege will always risk their complete destruction rather than surrender any material part of their advantage.”

That’s what’s underway right now.  Economic oxygen is in short supply and the elites are busy hoovering up for themselves a gigantically-larger share of that dwindling air (see billionaire headline above) even as tens of millions of their fellow citizens find themselves increasingly financially strangled.

On the political side, the only true political commitment I can detect (and it’s equal in both US political parties) is to defend the status quo.  In other words, they are committed to keeping the causes of our problems fixed firmly in place.

As this all progresses, most will experience the changes as a series of shocks, perhaps coming at too rapid of a pace for some to absorb and so it will become overwhelming to them.  The emotional costs involved will make it all very hard to accept, for myself included (even though I consider myself a very fast adjuster).

As our systems continue to fail, shrink, or even collapse, the pace of the changes will continue to be emotionally shocking.  I wish it wasn’t so. Frustratingly, it didn’t have to be this way.

How To Get Ahead

The ‘prediction’ that stems from all this is not really a prediction at all but rather a simple extrapolation: things are going to continue on their current trajectories.   Collapse is underway — and it’s a process, not an event.

To protect their relative advantage, the elites will pretend the problems are difficult to address and resist dealing with them.

This means the future will consist of a larger wealth gap, greater social and political tensions, more violence, less nutritious food, fewer insects and other species, more climate change, and a hard date with future resource scarcity.  And I mean hard.

None of which is actually all that unique in the human experience. Nor is it something to be necessarily feared.

As a species we’ve faced plenty of difficult times in the past and gotten through them. But some do manage to get through them better than others.  That will be equally true this time, too.

How does one ‘get ahead’ during hard times?

In Part 2: My Personal Formula For Success I provide a no-holds-barred transparency into how I am pursuing preparing for the coming future, as well as what efforts are working most effectively for me thus far.

There’s nothing about my formula that you can’t adapt and make your own. But you do have to follow it. And to do that, you have to start using the time you have left with an appropriate sense of urgency.