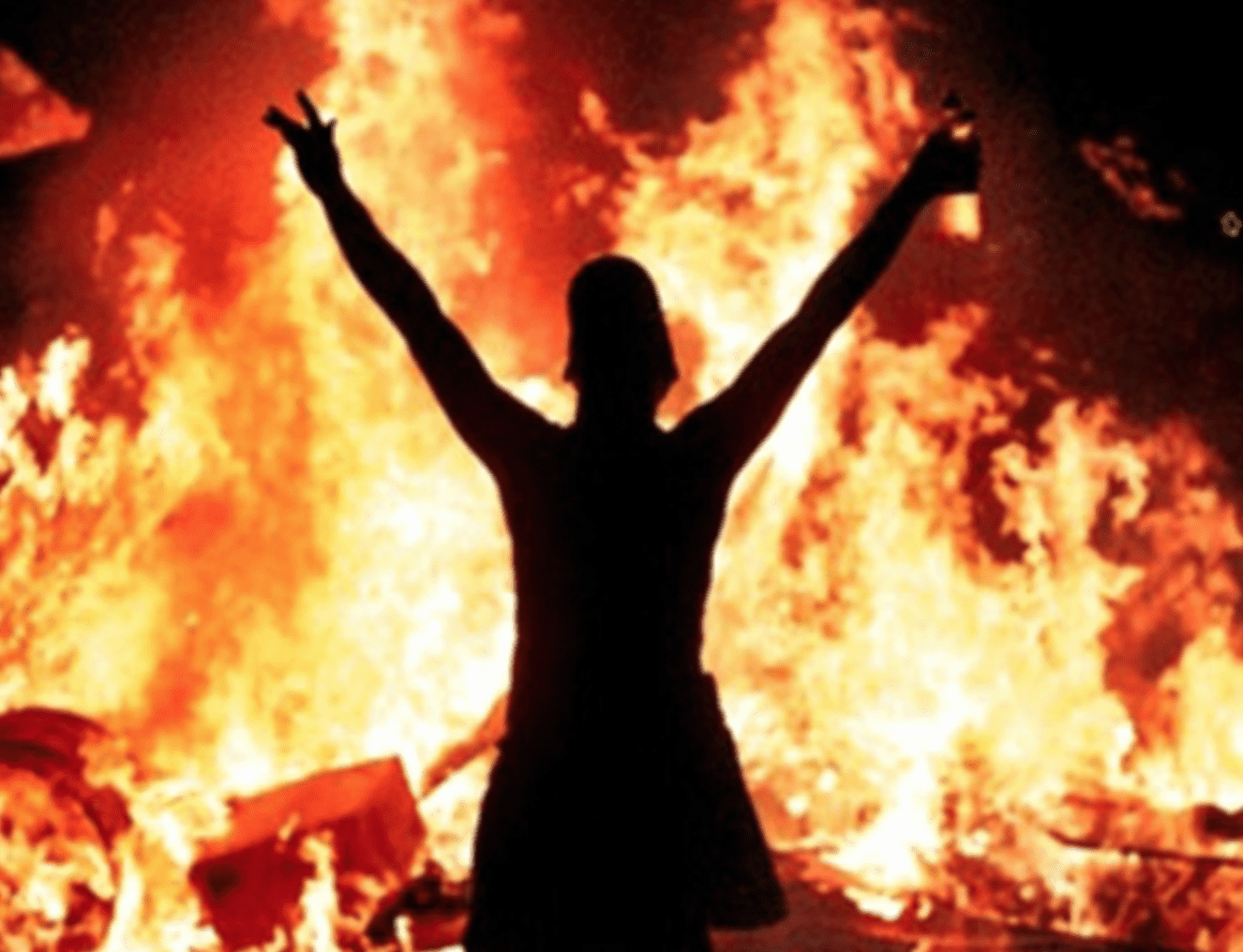 As The World Burns

As The World Burns

Decades of unfairness are now boiling over in the United States in the form of protests, riots, burning buildings and violence.

Minneapolis is on fire – literally – and the unrest has spread to numerous other major cities.

Last year (2019) The Yellow Vest protesters in France dealt with enormous amount of police violence and intimidation as they put life and limb on the line to try and wrest better economic and living conditions for themselves.

The people of Hong Kong are back out in force again now that the Coronavirus threat has abated, seeking greater autonomy and control over their own lives. Last year (2019) Chileans also protested, seeking better wages and living conditions.

While the specific demands of each of these movements are unique, they all share common causes.

Our analysis at Peak Prosperity is this: the days of constant exponential growth on a finite planet are drawing to a close. All of the systems that govern the sharing of resources among humans – political, economic and especially financial – are designed to concentrate, not share, wealth.

Taken together, we have an economic pie that is no longer growing but is subject to a set of laws and financial predation that guarantee the wealthy get more than their fair share of what remains.

In today’s world, it’s grapes for the elites and cucumbers for the rest of us (if we’re even that lucky).

That’s been the model for a long time, but lately it’s been both accelerating and exposed for all to see.

Team Elite™ is busy gorging on grapes. It has granted itself $trillions of freshly printed dollars from the US Federal Reserve in order to prop up ‘their fair share of things’ like bonds, stocks, and derivatives.

That leads to these sorts of jarring headline juxtapositions:

Without any question whatsoever, the Federal Reserve has been printing up money like crazy and stuffing it into every crevice of the US financial markets in a bid to…well, drive up financial asset prices.

They’ve been extremely tone deaf the entire way while pretending that their aim isn’t to make the rich richer, or deliver fatter profits to banks. Of course, both of those things are indeed happening as a direct result of the Fed’s policies and anybody with eyes can see that — yet the media refuses to acknowledge this.

Really, it’s extremely easy to identify. Here’s what ‘grapes for the wealthy!’ looks like — see that $3 trillion spike since April? 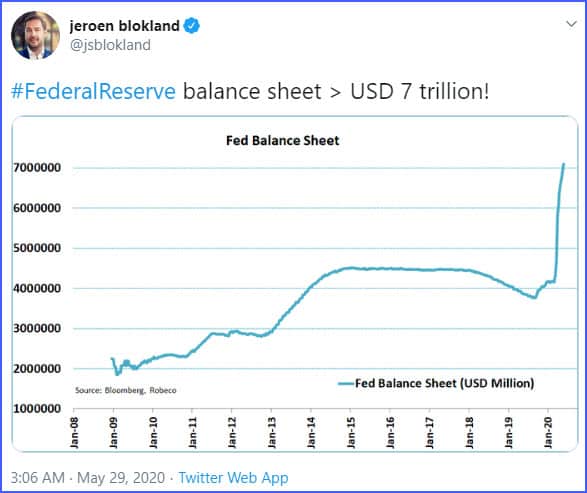 All of that printing leads to some stocks now being at their priciest ratio to earnings ever: 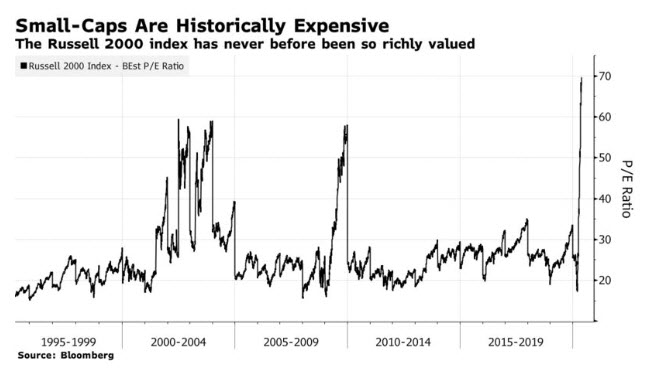 That means that those holding them are being rewarded like never before. And don’t forget that the richest 10% of Americans own over 84% of all stocks

We also see the same price-goosing with bonds. Corporate bonds are now once again approaching historically low yields which means, in the see-saw language of bonds, they are almost as pricey as they’ve ever been. In history: 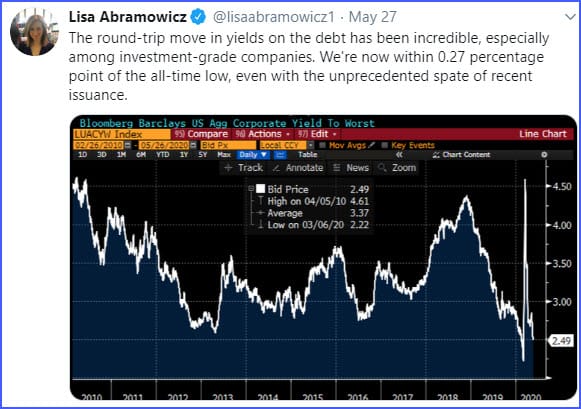 Who received the benefits of that gigantic cluster of grapes that the Fed has lavished upon the bond markets?

Well, the owners of all those bonds of course, and the major corporations now able to borrow at rock bottom costs even as small and medium sized enterprises are being wiped out.

As I often say, the Fed doesn’t actually create wealth, it redistributes wealth.  While doing that it is both directly and indirectly picking winners and losers.

The above chart of corporate bond yields says the Fed is picking large corporations and the wealthy elite  over small companies and Main Street folks.

Of course, there are no grapes quite as sweet as the ‘special interest’ varietals that are served to only the wealthiest of real estate investors: 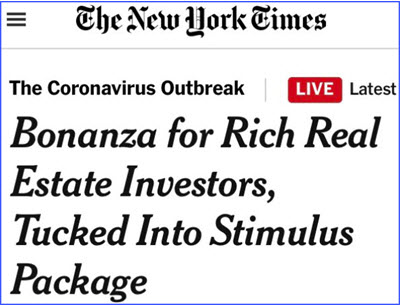 The only thing that could make this worse would be for some White House official to condescendingly insult all us regular people by referring to us in non-human terms. 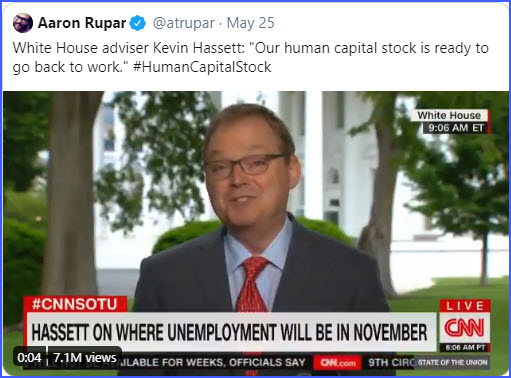 I have dozens more such examples. But I trust you get the point: the vast unfairness of the US system is now exposed for all to see. And that inequity has become even more predatory in our hour of need during the Covid-19 pandemic. Which is why social frustration and angst are now in the process of boiling over.

The reason why is as old as civilization itself, showing up ever since the first group of humans organized themselves into a cultural pyramid:

What the Fed is doing is wholly unnecessary and manifestly unfair. It will lead to tears yet, regrettably, it is completely avoidable. Grapes for Wall Street, and cucumbers (or worse) for everyone else. It’s just how they’re wired. They literally cannot help themselves,. So things are certain to get worse before they get better.

It All Boils Over

The institutional failures of the Federal Reserve aside, there are also the obvious failures of management (I can’t bring myself to call them ‘leadership’ anymore) at our major health institutions, politicians who are far quicker to the rescue of major corporations than constituents, politicized and even falsified ‘science’ coming from formerly respected institutions, the list goes on and on.

Every one of these breaches of public trust undermines our collective safety and security. Beyond some incalculable level the foundation gives way.

The lowest level of management in this story are the police. For decades many police departments have been heavily militarized and trained often by Israelis who’ve done a remarkable job embedding the mindset of occupying forces into US policing.

Toss in some unresolved racial biases and animosity, civil asset forfeiture, no-knock raids for petty reasons that routinely result in innocent lives being violently taken, and you’ve got a tinder pile waiting for a spark.

George Floyd was that spark. A particularly callous officer with a long string of unpunished claims of excessive force and violence lodged against him, knelt on George’s neck until he was dead while 3 other officers stood by and casually watched.  Against the backdrop outlined above, this was one flagrant abuse too many.

Editorially, the person now being vetted as a possible VP for the Biden campaign, Amy Klobuchar was the prosecutor in Minneapolis for many years who could have delivered justice to the lower classes. Let’s check her record:

Sadly, this is a record that can be found in hundreds of other cities. It’s neither an uncommon nor a defensible record. As a reminder, in the aftermath of the Michael Brown killing and riots in Ferguson MO (2014) the justice department came in and discovered that in a city of 20,000 mostly poor people there were 16,000 outstanding arrest warrants.  Think about that for a second.

Many for infractions like ‘impeding pedestrian flow’ (a.k.a. standing on the sidewalk). The humans were little more that ATM livestock for the police and court machinery to exploit.

And so, with the killing of George Floyd, Minneapolis exploded.

There’s More Unrest On The Way. Get Prepared.

Welcome everyone to these turbulent times.

We all want to live in a just, fair, and safe world. Some people are born into peaceful times. Others aren’t so lucky. History goes through its turnings.

Well, here we are, smack in the middle of a whopper of a fourth turning. So let’s make the most of it.

I take the safety and security of myself and the people around me very seriously. Because it’s my responsibility I train, and I plan, and I think things through.

My home is in a town I judge to be very safe, and I’m not the fearful sort, so I really have to push myself to prioritize the other steps. Which I am doing because it has to be done.

The calm days are over. There’s a new future coming, one that promises to be a lot more interesting as the old Chinese saying goes.

I wish I believed that the worst of the social unrest was behind us. I don’t. Given the actions of the Fed and Plutarch’s quote, and the total lack of any pushback from the media on these matters, I am anticipating grapes for the elites and worse-than-cucumbers for everyone else for many years to come.

Which means it’s time for you to more seriously consider your approach to personal security, especially if you live in or near a city. I certainly am.

As a true mark of the turning, a growing number of my friends who would never have considered owning a gun before are now thinking about doing so. All sorts of formerly ‘hard’ decisions suddenly become up for grabs when folks start feeling more physically vulnerable.

But personal security is far more than ‘owning a gun.’ It’s a mindset as well as a behavior set. And above all, it’s about avoiding trouble in the first place.

It includes taking sensible steps to protect your home from being an easy target for crime. It means having a plan and well-practiced skills in place to keep yourself and your loved ones safe from violence. It means aligning with neighbors to watch each others’ backs. It means practicing with whatever tools or systems you adopt so that they are second nature to you if you ever have to use them.

For those without extensive experience and training (which I assume is just about everyone reading this), the best presentation I’ve ever seen covering the practical essentials you need to know to maximize your odds of staying safe is this video from Peak Prosperity member Tom C., a 19-year veteran inner city police sergeant, given at our most recent annual seminar:

Here’s a brief 3-minute clip from it in which Tom is fielding Q&A on the audience’s top concerns:

Tom’s full seminar presentation is 48 minutes long and addresses key safety & security issues including how to reduce your threat risk profile, situational awareness, what to do (both mindset and actions) if in danger, how to create “layers” of defenses, as well as good home security options. Peak Prosperity’s premium members can watch it in full here.

Not a premium member yet? Enroll now to get access to the video.