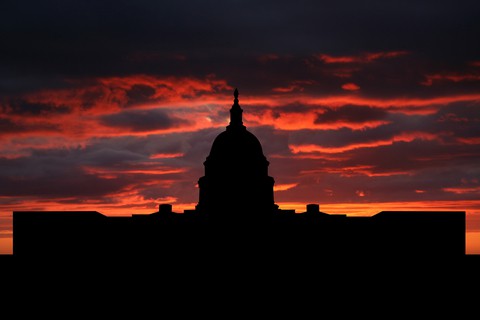 Anticipating the Devolution of Big Government

Anticipating the Devolution of Big Government

With the US elections approaching next week, as well as the threat of another fiscal cliff showdown looming, we asked contributing editor Charles Hugh Smith to revisit his earlier work on how the expansive Central State has come to dominate both private society (i.e., the community) and the marketplace, to the detriment of the nation’s social and economic stability. In this updated installment, we will examine six critical dynamics that will lead to the devolution of Peak Government.

In a misguided attempt to maintain an unsustainable Status Quo, the Federal government is borrowing unprecedented amounts of money that then must be serviced.  And the Federal Reserve is expanding its balance sheet by trillions of dollars (“printing money”) and intervening in stock, bond, and other markets for the purposes of managing perception (“the recovery is here!”)

These government funds are not just paying the government’s bills – they are being used to guarantee loans and mortgages that subsequently enter default, transferring what was private debt to the public and subsidizing politically powerful special interests.

Guarantees and subsidies both incentivize what is known as moral hazard: the separation of risk from consequence.  This can be summarized very simply.  People who are not exposed to risk act completely differently than those who are exposed to risk.  When risk has been transferred to the taxpayers by guarantees, give-aways, and subsidies, then speculation and mal-investment are incentivized.  If the bet pays off, I get to keep the gain, but if it loses, then I personally lose nothing, as the loss is transferred to the taxpayers.

The net result of these policies – borrowing immense sums to prop up an unsustainable Status Quo and institutionalizing moral hazard – leads to misallocation of scarce capital on a grand scale.  In effect, the money borrowed by the federal government and electronically printed by the Federal Reserve is mal-invested, because those receiving the funding are personally not at risk and face no consequence if the money is squandered on speculation or unproductive programs. Once moral hazard has been institutionalized, it becomes a positive feedback loop.  Since everyone in the system faces little personal consequence from mal-investment, the institution loses the ability to police itself.

Erosion of Trust in Government

Mal-investment inevitably yields poor results, and just as inevitably, the government seeks to mask the dismal results of moral-hazard riddled policies and agencies.  This “perception management” is driven by political expediency, as public outrage at failed policies and unproductive spending would eventually lead to a political price being paid by the leadership.  So failed policies are declared great successes, negative data is massaged into positive data, and unflattering frauds involving public funds are buried or transformed into pseudo-realities.

This institutionalization of mal-investing borrowed funds and the politically expedient falsification of fact to manage perceptions have a destabilizing consequence: The public loses faith in public institutions.

Massive borrowing also has a consequence.  Interest on the immense sums being borrowed squeezes out other government spending.

This triggers two self-reinforcing feedbacks.  Public spending that is not rewarding moral hazard is cut, as those in charge protect their perquisites, and taxes on what’s left of the productive economy increase, reducing the private investment that is the bedrock of capitalist growth and innovation.

This institutionalized mal-investment leads to diminishing return.  Where each dollar of additional public debt generated nearly a dollar of additional GDP in the early 1960s, now borrowing a dollar generates negative growth, as the cost of servicing the debt exceeds the meager yield.  Thus the Federal government borrowed and spent a staggering $6 trillion in a mere four years (2008-2011), while the GDP has yet to return to 2007 levels when measured in real (inflation-adjusted) dollars.

All these forces reinforce each other in a death spiral.  As trillions more are borrowed, interest payments crowd out spending, causing the Central State to borrow even more, which generates even more interest costs, and so on.  As moral hazard infects the entire government and its numerous private contractors and beneficiaries, there are few constraints on rising public debt and mal-investment of public funds.  As trust in institutions that increasingly depend on perception management rather than real solutions declines, public faith in government deteriorates further.

The Hidden Tax of Inflation and the Institutionalization of Falsification

The government has one trick to create the illusion that it is “keeping its promises.”  It prints money to meet its obligations, depreciating the nation’s currency by expanding the money supply.  Creating money out of thin air does not create wealth, productive assets, or prosperity.  What it does is lower the purchasing power of money, which we call inflation.

Inflation robs every holder of the currency and is effectively a form of government-sanctioned theft, or if you prefer, a hidden tax on productivity, as productive people and enterprises are taxed to support crony-capitalist, unproductive mal-investments and the rising interest on public debt. In effect, inflation is a way of transferring wealth from the productive to the unproductive, which then leaves the productive with less capital to invest in innovation. This starves the economy of capital while robbing purchasing power of every citizen, establishing a positive feedback loop of lower income, lower capital formation, and lower productivity.

Since the government has obligated itself to adjust Social Security payments to inflation, the culture of understating inflation (i.e., falsifying data) has been institutionalized, for the Central State has the impossible dual mandate of increasing inflation so that it can meet its obligations with cheaper money while keeping the inflation-indexed cost-of-living adjustments low, lest program costs balloon out of control.

If the rate of inflation was to rise at a rate similar to that of the late 1970s, i.e., 10% to 12% per year, while the “official” rate was held to half the real rate, all those whose incomes did not rise by 10% a year would be impoverished as the purchasing power of their incomes evaporated. Meanwhile, even as its policies impoverish most of its citizens, the Central State would assure everyone that it was meeting all of its obligations as promised. This is how trust in government is not just eroded but ultimately destroyed.

Government at all levels responds to shrinking tax revenues from a declining economy and budgets squeezed by higher interest payments by seeking additional revenues by whatever means are at hand. Tax rates are raised, junk fees are imposed, fees for minor infractions are jacked up, and deductions and exclusions are eliminated.

The public that does not work for the government (that would be five-sixths of the workforce) increasingly resents what it perceives as predatory extortion in an economy where everyone’s disposable income is falling.

Unfortunately, there is a great divide between those who work (or worked) for the government and those who work in the private sector.  Those in government service understandably view the promises made to them in good times, eras that we now understand were brief speculative bubbles, as sacrosanct.

The promises were based on the abnormally high returns earned by pension funds in the brief windows of speculative frenzy, and even supposedly conservative pension funds based their projections on annual yields of 6% to 8%.  As the Federal Reserve has attempted to reignite borrowing by lowering interest rates to near-zero, low-risk yields have fallen to 3%, less than half the expected returns.

As a result, there is a massive and sustained shortfall of public-employee pension funding, a shortfall that must be paid out of general tax revenues at a time when those revenues are declining as employment and business activity stagnate.

The net result in many communities is that schools and other local services are falling apart as budgets are slashed to meet skyrocketing pension obligations.  From the point of view of parents, the pension promises that government employees hold as sacrosanct were unrealistic, and what should be sacrosanct (but is not) is the education of their children.

Those of us in the private workforce with spouses, relatives, and friends in government service understand the frustration of those who work for government, but should the self-interest of the few dominate the public budget and chart the course for the many?

The key difference is that the government holds the power of coercion and the citizens do not. Thus those in government who seek to serve the interests of their unions, colleagues, departments, and agencies can impose fees and taxes on all citizens to fund their own perquisites and power.

From the point of view of those inside government, sharply rising parking tickets, higher property taxes, and so on are small prices to pay for essential services. But as citizens observe government services degrading even as fees and taxes increase, they see little value being added, even as self-service and moral hazard remain in institutionalized abundance.

Two destructive feedback loops are generated by this divide: Governments, desperate for more revenues, ignore public resentment and loss of trust, which only deepens the disconnect between those in government and the public.  And the private citizenry sees a lack of accountability, soaring public debt, accounting trickery, political dysfunction, and mal-investment of public funds as the hallmarks of their government.

In Part II: Understanding the Economic Impact of Peak Government, we explore how these self-reinforcing feedbacks lead to the devolution and eventual collapse of government institutions. In particular, we analyze what the likely economic fallout will be, as there is simply not enough purchasing power to distribute between those in power and the needs of the general populace.